Two years into the operation of the Marsh School and Cure, and halfway across the country, D.D. Palmer was serving a 105-day jail sentence for practicing medicine without a license. Following his conviction in 1906, he had been given the choice of either paying a $350 fine or serving 105 days in jail. Initially, he refused to pay the fine and was sentenced to the 105-day term. He must have thought better of his decision. After serving only 23 days of the sentence, he secured his release for $389.50.

It was during this same period of time that D.D. Palmer, the “Founder of Chiropractic,” and his son, B. J. Palmer, were at odds with one another. The relationship between father and son had soured to such a degree that a negotiated settlement dissolved D.D.’s interest in the Palmer School in Davenport, Iowa. Following this episode, D.D. moved to Oklahoma where he and Alva Gregory, MD, DC, started the Palmer-Gregory College of Chiropractic. Palmer left this institution after only a few months and started an association with Wilbert R. Gorby, BS, DC, and Roy B. Hinkley, DC, who were operating the Southwestern Chiropractic Institute in Oklahoma City. In mid-1908, D.D. heard that his son was conducting a course for chiropractors in Portland, Ore., and he feared that B.J. was planning to start a school there. This was a period of great contention between father and son during which the two battled over the use of designations such as: “fountain head,” “developer,” and “founder.” It is likely that B.J.’s visit to Portland precipitated D.D.’s hasty departure from the Southwestern Chiropractic Institute and his arrival in Portland later that year.

On November 9, 1908, D.D. opened the D.D. Palmer College of Chiropractic in Room 205 of the Oregonian Building in Portland, Ore. 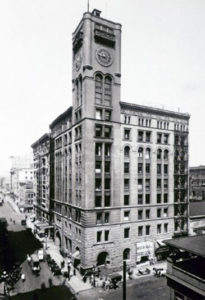 Most historians agree that John LaValley, DC, most likely provided the $1,800 seed-money that brought D.D. to Portland and funded the D.D. Palmer College of Chiropractic.

In the January 1909 issue of The Chiropractic Adjuster, D.D. identified himself as “the Founder” of his new enterprise, but identified Leroy M. Gordon as “Manager.” Within a matter of months, the D.D. Palmer College of Chiropractic relocated to the Drexel Building at the intersection of SW Second Avenue and Yamhill.

The D.D. Palmer College of Chiropractic offered a two-term (5 months each) curriculum for $150: For students interested in advancement beyond the Doctor of Chiropractic or DC degree, a “Master of Ease” degree was available.

It was not long before problems began to surface at the D.D. Palmer College of Chiropractic. Feeling that his was the one true approach to teaching chiropractic, D.D. became a frequent and outspoken critic of his cross-town rival, Dr. William Powell. The two debated chiropractic theory openly and publically, presumably in a less-than-civil manner. Tensions between the two institutions were not improved by D.D.’s partner, Dr. John E. LaValley, who frequently offered his own theories about chiropractic, many of which were in direct contrast to Palmer’s.

Sometime in late 1909, their personal relationship and business partnership began to unravel. According to Dr. LaValley, D.D. adopted many of the theories of other chiropractors and published them as his own without giving credit to the sources. Dr. LaValley eventually refused to share his thoughts and theories with D.D. A rift between the two occurred when Dr. LaValley stated publicly that he preferred to wait until D.D. finished writing, at which time he would be “…glad to give him my opinion.” His character thus impugned, D.D. demanded that Dr. LaValley depart from the college and leave the running of it to him. In response, Dr. LaValley demanded that D.D. return the $1,800 he had advanced to start the school. A refund was not given to Dr. LaValley and he subsequently claimed title to the college. By February 1910, conditions at the D.D. Palmer College of Chiropractic had become intolerable. D.D. routinely voiced his dissatisfaction with the lack of dedication exhibited by his students. He felt that students were not “…desirous of knowing or capable of learning (either result being the same) all of Chiropractic as presented to the Portland class…” The students held an equally low opinion of him. Sometime in 1910, their dissatisfaction with Dr. Palmer’s verbal abuse reached a flash-point and they rebelled, walking out of his class in protest, complaining that D.D. had made uncomplimentary comments about his son and D.D.’s first wife, something they felt was inappropriate lecture material. 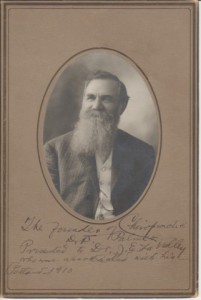 By late 1910 or early 1911, D.D. abandoned the school that carried his name. He left Portland entirely and moved to California where he began lecturing at the Ratledge School, the forerunner of Cleveland Chiropractic College of Los Angeles.