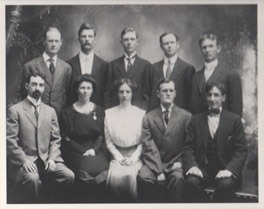 LaValley front row left and a class thought to be attending the Oregon Peerless College of Chiropractic-Neuropathy in 1911 or 1912. 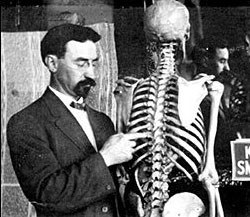 He appointed himself “President and Philosopher of Chiropractic-Neuropathy.” An astute businessman, Dr. LaValley diversified the portfolio of available programs at the Peerless College by offering a 12-month DC-N program to those who had no previous education in the health professions and a shorter program of postgraduate courses for existing chiropractors, osteopaths and medical practitioners.

The Peerless College graduated a class of seven in 1912, not nearly the number of students necessary to maintain financial viability. Having few other options, in 1913, Dr. LaValley approached Dr. William Powell with a proposal that their two colleges merge. Even though the colleges they represented had been in fierce and sometimes contentious competition with one another, Drs. LaValley and Powell got along quite well. The two had a history of working cooperatively and successfully in the political arena. They are credited with having founded the Oregon Chiropractic Association (OCA) in 1907. Additionally, they had both been enrolled in the courses presented by B.J. Palmer during his visit to Portland in July 1908.

In 1913, Dr. LaValley agreed to have his college absorbed by the Pacific College of Chiropractic. PCC retained its name, Dr. Powell remained president, and Dr. LaValley became a member of the faculty.

The merger of the two schools precipitated an expansion of the DC program. The 1913-1914 PCC catalogs boasted a two-year program totaling 2,896 hours of study.