On June 30, 2002, after 24 years at the college, Elizabeth Olsen, DC, retired. Dr. Olsen had championed women’s health care issues, taught the obstetrics and gynecology courses, and supervised the hands-on labs through which students could demonstrate their competency. Performance expectations in her courses and labs were high, something many students didn’t appreciate until they took their licensing examinations.

In August 2002, the college was notified that the West Burnside clinic would receive an $84,000 grant from United Way to support the provision of chiropractic services to the indigent population in downtown Portland.

In late 2002, Dr. William H. Dallas formally announced his retirement. After 17 years as the president of Western States Chiropractic College, the time had come for him to pass those duties and responsibilities on to another. By the close of 2002, Dr. Dallas and the chief financial officer agreed the danger of defaulting on the college’s loan service agreement had passed. Based on this rosier projection, the college reinstated faculty, administration and staff salaries. 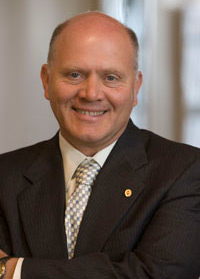 The same month that Dr. Dallas announced his retirement, the college hired Shireesh Bhalerao, DC, to teach in the department of chiropractic sciences. Dr. Bhalerao, a relatively recent graduate, had already established a successful private practice, but wanted to pursue his interests in chiropractic education and research. Like a few other members of the faculty, Dr. Bhalerao divides his time between the college and private practice.

In April 2003, the Board of Trustees announced the selection of Joseph E. Brimhall, DC, as the next president of Western States Chiropractic College.

Many accomplishments would be made under his leadership, but it will be left to other historians and archivist to document them.