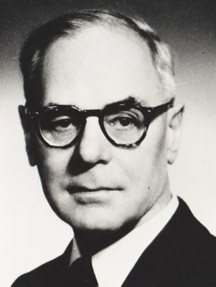 From the very beginning of his association with the chiropractic profession, Budden was recognized for his towering intellect, wit, candor, scholarship and leadership. He was an extraordinarily talented writer and speaker. His roles as gifted teacher, dedicated educator and astute politician, however, would be what the chiropractic profession would most remember and appreciate.

Born William Alfred Budden in Farnham, England, on Sept. 17, 1884, he chose to go by his middle name, Alfred. In 1903, he immigrated to Alberta, Canada, to enroll at the University of Alberta, where he studied economics, eventually teaching the subject at that institution.

In 1917, he moved to Great Falls, Mont., where he met and married Kathryn Kenny in 1919. She was the third of ten children, in her family in Grand Forks, North Dakota. Kathryn was a dedicated student at the university where she obtained a teaching degree and taught before moving to Montana. Kathryn was as much of an influence and partner in the decision-making that shaped the couple’s life as Dr. Budden was. She was Dr. Budden’s confidante, business partner, greatest admirer and his source of endless inspiration and support. Chiropractic historians concur that theirs was a remarkably warm, mutually loving and respectful relationship that made them inseparable. Even though she did not receive the same degree of recognition as that given to Dr. Budden, her contributions to the advancement of chiropractic education were no less significant.

On the advice and encouragement of Dr. Budden’s brother, Leonard, who was a 1920 graduate from National College of Chiropractic (NCC), the newlywed Buddens moved to Chicago. Alfred enrolled at NCC and graduated in 1924, whereupon he joined the faculty. When the NCC dean and editor of the school journal resigned in 1925, Dr. Budden filled both positions. During his tenure at NCC, the college established one of the first four-year chiropractic programs. By 1928, he had authored numerous articles for professional journals, as well as a chiropractic textbook: Physiotherapy, Technique, and Treatment.

It is likely that Dr. Budden was persuaded to move to the Pacific Northwest by Kathryn, who was from that part of the country. Regardless of the influence, in 1928, the Buddens moved to Portland and purchased Pacific Chiropractic College from Dr. Lenore Elliott. To ensure some degree of protection for his investment, Dr. Budden incorporated the Pacific Chiropractic College in August 1929, appointed himself president of the board of directors, and moved all of the college’s assets and liabilities, which were in his name, to the incorporated college for $10,000. Budden incorporates assets.

As astute as the decision was to protect their investment through incorporation, there would be no financial insulation for the Buddens or for anyone else in the nation when the stock market crashed two months later, in October 1929.