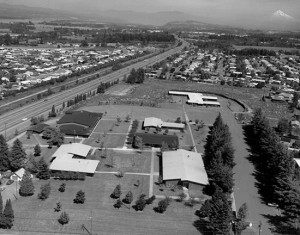 On November 1972, a group of administrators and trustees from the college paid a visit to Marycrest School, a private Catholic high school for girls run by the Sisters of St. Dominic Convent.

The college representatives touring Marycrest began proposing ways to finance the $1.1 million price tag even before they left the campus. They agreed unanimously that the site was perfect for the needs of the college. It was a beautifully manicured 22-acre campus of greenways, classrooms and cloisters. It was already a school requiring little, if any, upgrading. Additionally, half of the 22 acres consisted of undeveloped land, which would be more than adequate for expansion.

On Dec. 15, 1972, the WSCC board voted unanimously to make an offer to the Sisters of St. Dominic Convent for the purchase of Marycrest School. An offer was tendered the following week and accepted almost immediately by the Sisters.

Of historical note, during his run for the White House in 1960, John F. Kennedy conducted a campaign stop in Portland and paid a visit to the Marycrest School. 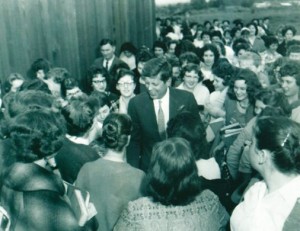 The entire college community, from students to trustees, recognized the purchase of Marycrest would be a formidable undertaking. Despite the lack of wherewithal to subsidize its purchase, Marycrest represented an opportunity that could not be missed. The two parties agreed to a payment schedule that was interesting, if not unusual. An initial $50,000 payment was to be made by Feb. 15, 1973; a second payment of $50,000 was to be made by June 8, 1973 with the balance of $1,000,000 to be paid by Feb. 15, 1974. If the balance was paid in full by February 1974, interest on the debt would be forgiven. If the balance was not paid by that date, the schedule would revert to payments of $200,000 per year, plus interest, starting Feb. 15, 1974. The entire campus community and the chiropractic profession of Oregon were in a celebratory mood over the good fortune of WSCC. Unfortunately, the celebration was dampened considerably when news of the sale was made public. Some neighborhood residents voiced their opposition to the presence of a college due to concerns of increased traffic. 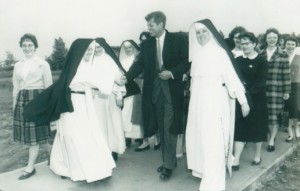 It was an extraordinary start to 1973 and the year would present even more extraordinary challenges. Ways and means to finance the mortgage poured in from students, faculty, alumni, trustees, bankers, lawyers, consultants, and realtors. Any hope the college had of financing the formidable mortgage payments would depend on the college’s ability to rally support from all quarters. In anticipation of the need for an immediate infusion of $50,000, the college administration announced a substantial tuition increase. Also, a handful of Oregon chiropractors stepped forward to pledge $1,000 towards meeting the first $50,000 payment and encouraged their colleagues to do the same. It was hoped that additional revenue would come from the sale of the 63rd Street campus, which was on the market for $75,000.

The purchase of a new and expensive campus gave rise to a number of creative ways to generate revenue, fundraise and attract contributions. Dr. Jimmy Parker, entrepreneur and founder of Parker Chiropractic College, offered to hold a fundraising seminar on the new campus, with all proceeds going towards payment on the mortgage. Although the origin of the proposal remains unknown, the WSCC Board authorized Dr. Elliot and his administration to bring country/western superstar Merle Haggard to Portland for a benefit concert.

In a move that was clearly beyond its operational capacity, the WSCC board submitted an application to the Oregon Department of Commerce to write financial agreements with investors interested in “…revocable trust agreements, charitable remainder trusts and charitable remainder annuity trusts…” Manufacturers, distributors and vendors of chiropractic products were approached for contributions. In case it became necessary, the board made preparations to sell 10 acres of unused and undeveloped property on the east side of the campus.

The college exhausted its cash reserves and met the initial $50,000 payment in February 1973. However, they were immediately faced with finding the next $50,000 that was due in just six months. To their credit, the board, President Elliot, and the college administration were tireless and tenacious in their search of financial support for the next payment. Unfortunately, by the end of May, their combined efforts had generated only $16,000.

The college was not meeting its current operating budget and the prospect of producing an additional $200,000 by February 1974 appeared challenging at the very least. Sustaining that level of financial productivity for the ensuing five years appeared impossible. Finding financing for the new campus required the focused attention of the entire campus, but it was not the only area demanding attention.