1988 began with cautious optimism. The alumni association presented a signed document to the Board of Trustees agreeing to transfer $35,000 to the college endowment fund. There was no mention of what would be done with the remaining money, but as a further concession, the association agreed to work with college administrators to rewrite their constitution and bylaws. WSCC was close to fulfilling the CCE requirement to bring the association under college control. The college community breathed a collective sigh of relief.

Unbeknownst to the college, sometime during the past eight years, the land upon which the campus was located had been annexed by the City of Portland. Permitting would now have to comply with city requirements, ordinances and processes; Multnomah County was no longer involved in the process. The college had no reason to believe the permitting process through the City of Portland would be any more difficult than it had been through the Multnomah County planning commission. The college would not be rewarded for its naiveté. The planning process for construction of a new lecture hall would have new formats, new requirements, new submissions, new documentation, new reports, new processes, new faces and new attitudes. Obtaining authorization to build a new lecture hall would become a difficult process.

In February 1988, the college expanded its clinical services to downtown Portland. Conducting clinic operations in this area would provide a more meaningful and challenging clinical experience for the student interns. The college started clinic operations in conjunction with the Eastside Community Clinic, also known as Baloney Joe’s. Baloney Joe’s was a free, walk-in, multidisciplinary clinic providing medical, chiropractic and other community services to low-income individuals, the uninsured, the indigent, the homeless, the undocumented, the substance abusers and health-compromised persons having no means of support. It was a relatively small commitment that would grow over time to become a staple of clinical training at the college.

By the end of 1988, much progress had been made with enrollment; 138 new students enrolled for the fall class, well in excess of the targeted number. If the college continued this trend, it would reach a total enrollment of 500 within a year. By December, the admissions office reported it had already received 121 applications compared to 70 from the same period of the previous year.

Total receipts from fundraising activities for fiscal year 1987-88 totaled $98,567. The alumni association surrendered $40,000 to the college’s endowment fund and rewrote its bylaws, bringing the college into compliance with CCE standards. Issues related to institutional stability were quickly fading.

In 1989, the college was moving forward and by all appearances, the future looked rosy. Clinic services to the indigent population in downtown Portland were expanding beyond Baloney Joe’s. An agreement with the Volunteers of America (VOA) provided chiropractic outpatient services at their facilities. This commitment doubled the number of opportunities for student interns to gain valuable clinical experience in a primary care setting. Dr. Nyiendo’s retrospective study of patients treated by the State Workers’ Compensation Division had been approved, funded, and was in the final phase of data gathering. In June, the college hosted a very successful homecoming event that grossed more than $50,000. The only looming challenge the college was aware of was how to pay for connecting to the new sewer system. 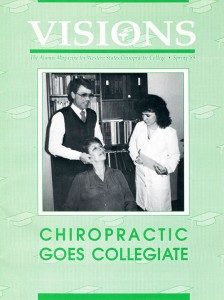 However, a new challenge came later that year when the faculty voiced its dissatisfaction with college leadership. As it turned out, college leadership was equally dissatisfied with faculty. The faculty was disenchanted with the governance style of the new administration. Faculty felt the president was managing the college as a corporation and not as an institution of higher learning. Faculty felt its input and participation was undervalued by the administration and its historic role diminished. Faculty members preferred the former shared-governance style to the new approach. Faculty complained of being isolated and kept in the dark on important issues.

The administration didn’t see things much differently, but viewed the issues from an entirely different point of view. President Dallas conceded his leadership style was more in keeping with that of an executive officer of a large corporation or national trade organization. He admitted his lack of experience in higher education likely contributed to an environment of mutual dissatisfaction and distrust between him and faculty. Nevertheless, Dr. Dallas disagreed with faculty on a number of issues. He felt faculty was more involved in participatory governance than was appropriate. He offered as evidence the college’s over-reliance on 20 different committees, populated and chaired mostly by faculty. It wasn’t the number of committees that troubled the president; it was that many of the committees viewed themselves as decision-making bodies. Dr. Dallas felt committees should be recommending or advisory bodies to administrative decision-making.

Faculty favored a more democratic and less autocratic model of governance, advocating for participatory involvement in college decision-making. President Dallas favored a less familiar and more accountable model of governance, advocating for a narrower interpretation of shared governance. He wished to move away from the bureaucratic, “mom-and-pop” organizational style that had emerged at the college and contributed to inaction and stagnation. These deeply-held perspectives and convictions eventually created an impasse for the two sides. It became necessary for the two sides to sit down for a series of face-to-face meetings to reconcile their differences.

On September 30, 1989, the administration and faculty temporarily set aside their differences to bid farewell to Dr. Appa Anderson. She had announced her retirement months earlier and the college settled on this date to conduct a party in celebration of her 38 years of services. She had become one of the most beloved of the WSCC community and the chiropractic profession. None of the hundreds of students she taught would ever forget her, especially those who could not correctly identify a boney landmark or a lesion on an X-ray. She was known for lovingly cuffing the back of a student’s head or stricking them lightly across the shoulders to reinforce learning. The blows were never delivered with malice and almost always produced a smile from the errant student. Dr. Anderson was one of the strongest supporters of the college, always willing to give generously. Many of her former students referred to her as “The Patron Saint of Western States.”

The month after Dr. Anderson retired, the college hired Dr. Daniel DeLapp to work as a clinic director in the campus outpatient clinic. DeLapp would go on to obtain a doctor of naturopathy degree from National College of Naturopathic Medicine, while maintaining his WSCC clinic responsibilities. With chiropractic, naturopathic, and acupuncture licenses, it was inevitable that Dr. DeLapp would join Dr. Roberts to run the Columbia Integrated Clinic.

Although the faculty and administration likely did not appreciate it at the time, bringing the two sides together on a regular basis to share their differences ultimately brought about changes that strengthened the college. A different governance structure was eventually established and much of the discontent subsided. President Dallas added faculty representation to his executive committee and he agreed to the creation of a strategic long range planning committee (SLRP), consisting mostly of faculty.

Over time, the newly populated executive committee provided a voice and perspective that the president would not have heard otherwise. The SLRP served as a vehicle for faculty input to college planning. Certainly, there were issues that each party felt did not get resolved or needed greater resolution, but in the end a mutually respectful co-existence was established. Peace between the two sides may have been the preferred objective, but the two settled for a “cease-fire” as the year and the decade came to an end.