If previous decades of feast and famine, expansion and contraction, progress and setbacks were indicators of an established trend, the college could have predicted the 1990s would present a similar pattern of challenges.

The administration and faculty worked diligently to find comfort with an organizational structure born of collective differences. The number of committees was reduced by half. Committee memberships were reduced in number; and the scope and function of each committee was re-defined. The re-configured president’s cabinet was meeting three times a week and communicating openly and broadly to the campus community. Much of 1990 was a period of transition. As administration and faculty continued to meet, it became apparent the college was grappling with some very deeply established core values and beliefs that, if left unresolved, would result in further impasse and immobility.

The entire campus found itself in the grip of a pervasive uneasiness. Tightly held beliefs and intractable positions assumed by various campus constituencies created an unhealthy climate of distrust, dissatisfaction and confusion.

Only in retrospect can reasons be given to explain the campus-wide discomfort:

The college was a rudderless boat, lacking a set of goals and objectives by which to unify it and crewed by disparate groups rowing in different directions. WSCC was having an identity crisis.

To move forward with any hope of success, the college would have to come to agreement on its “brand” of chiropractic. Finding agreement on a commonly accepted identity would require compromise. Compromise meant some positions and points of view would achieve greater importance, while others would fade. Not every voice would prevail, and some would grow silent. Recognizing how serious the situation was, the administration convened a series of meetings with various campus constituencies to address the identity issue head on. Participants would be required to “challenge, confront and debate,” but not ridicule. The college had to find consensus on the “brand” of chiropractic it would teach. The most active period of challenging, confronting, and debating took place in early 1990. It was a time-consuming, grueling, and often painful process that everyone agreed was necessary to achieve consensus. The candid discussions held on campus in 1990 produced greater clarity on the educational program the college wished to offer, but the conversation had only just begun. More time would be needed to refine the college’s position. By mid-1990, the college had completed and submitted its accreditation self-studies in preparation of a joint visitation from the CCE and the NWASC in the fall. This would be the first time representatives from both accrediting agencies conducted site visits simultaneously. The college felt prepared for the visit, knowing that both agencies would focus on strategic planning. In creating the strategic long range planning committee, the college had established both a vehicle and process by which to conduct future planning on an over-arching scale. The college was confident the plan submitted by the SLRP committee would satisfy both accreditation agencies.

As the college prepared for the joint accreditation visit, another chiropractic crisis began to slowly unfold, a crisis that would eventually involve WSCC. Initially, it was a crisis for the profession in Oregon, but before it was over, the crisis would spread to almost every state.

For more than a year, Oregon chiropractors had been hearing accusations by workers’ compensation insurance providers that some chiropractors were engaging in billing practices that were unprofessional, at the very least, and fraudulent at their worst. In April of 1990, what had been only rumblings, suddenly and dramatically escalated into a series of explosive events that played out on the evening news and in the pages of local and regional newspapers. Reporters of both mediums had been tipped-off that the Oregon attorney general was about to conduct a series of raids on a number of local chiropractors. The public watched the evening news as three chiropractors were led away from their offices in handcuffs. The three were arrested for allegedly filing fraudulent workers’ compensation claims. Six others were arrested in the same raid and charged with over-billing the State Accident Industrial Fund. Charges against the accused ranged from first-degree theft to mail fraud and racketeering.

The state chiropractic association publicly condemned illegal and unprofessional practices by any health care provider and issued a strongly-worded concern that SAIF had chosen to focus on the entire chiropractic profession, instead of the few chiropractors who allegedly engaged in misconduct. It took many months and more than a million dollars to litigate the criminal charges. Two of the chiropractors settled with SAIF for small fines, while three of the chiropractors chose to fight the charges against them, entering pleas of not guilty. The three were tried separately and each was found not guilty. In the end, no chiropractors were convicted, but the chiropractic profession suffered greatly as a result of this debacle. Chiropractors were allowed to continue their participation in the workers’ compensation system, but their role was greatly diminished and limitations were placed on the patient-care services they were allowed to provide. Many other states followed suit by employing similar measures to limit chiropractic participation in their respective workers’ compensation systems.

It is remarkably ironic that at the exact same time SAIF was claiming fraudulent practices by chiropractors, SAIF patient files were being reviewed by Dr. Nyiendo and her team of researchers. Dr. Nyiendo had received a $30,000 grant (signed by the governor) to conduct a retrospective study of SAIF files of patients presenting with low back pain. She was compiling and interpreting the data the very moment that SAIF and the “fraud quads” initiated action against targeted chiropractors. 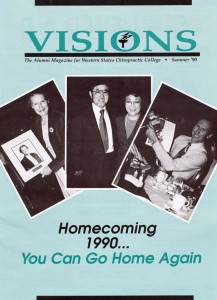 In August 1990, SAIF produced a 665-page report detailing 1988 and 1989 provider payments. The report was especially critical of chiropractic care. Headlines in leading newspapers across Oregon read, “Chiropractors: Cases Prove to Be 2.5 Times More Expensive.” The October 1989 issue of Oregon Business reported, “The average cost per claim (for chiropractic care) was $703, compared to $284 for a medical doctor. Chiropractic claims are likely to remain open much longer, too.” Dr. Nyiendo knew that the information being fed to the press by SAIF was incorrect.

In a bold move, she appeared before a Legislative Hearing Committee to testify and provide supportive documentation that SAIF was misinterpreting the data and misleading the public. Her findings were confirmed by the Oregon Department of Insurance and Finance. In a letter to the speaker of the house, the Department of Insurance and Finances stated, “Dr. Nyiendo’s criticism of the use made of the 1988 data is essentially valid: the data did not fairly compare actual medical costs among providers.” Almost single-handedly, Dr. Nyiendo discredited the SAIF claims against the chiropractic profession. Unfortunately, severe damage had already been done to the chiropractic profession in Oregon. It would take years to recover. 1990 would end with Oregon chiropractors sporting a collective black-eye.

However, the college found itself more appreciated because of the willingness of Dr. Nyiendo to battle on behalf of the profession.

In fall 1990, Jim Gerber, DC, joined the clinical science division, where he became the lead instructor for courses relating to nutrition. Dr. Gerber authored numerous articles on the topic of nutrition and served as the college’s resident expert on this subject.