The May 1910 PCC catalog lists Dr. Powell as the president. The May 1910 catalog also claimed the college was chartered as a not-for-profit institution. Documentation cannot be found to verify this claim, but if true, it makes PCC the first chiropractic colleges to be founded as a non-profit.

In the summer of 1910, PCC announced that it was relocating to the Commonwealth Building on the corner of SW 6th and Burnside, one of the busiest intersections in all of downtown Portland. In 1912, PCC reorganized again, this time with Edwin F. McKee as president and Dr. Powell as secretary of the college corporation. A year later, on December 13, 1913, Dr. Powell submitted new articles of incorporation changing the name of Pacific College of Chiropractic to “Pacific Chiropractic College”

Most of what is known about Dr. William O. Powell is contained in accounts from the 1950s written by Dr. Powell’s wife, Anna. 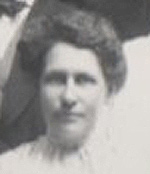 She was born in Lyngdahl, Norway and immigrated with her family to North Dakota when she was a child. She married Dr. Powell in Butte, Mont., on February 24, 1900. The two spent brief periods living in upstate New York and Chicago, before moving to Dr. Powell’s home state of Oregon where he enrolled in the Marsh School and Cure, in 1904.

According to Anna, Dr. Powell’s health began to fail over time. By early 1917, he was forced to take an extended vacation to Montana. He returned to Portland in the fall of 1917, but stayed only through the winter, returning to Montana in the spring of 1918. The Powells had intended to return to Portland in the fall of 1918, but the great influenza pandemic swept through Montana and they decided to stay there and care for the local population. According to Anna’s account, they never lost a patient. It is unclear precisely how long the Powells remained in Montana, but it is known they resided in Wyoming for a while before returning to McMinnville in the early 1920s. The Powells established permanent residency and a chiropractic practice in McMinnville, where Dr. William Powell would go on be elected county judge. On Thanksgiving morning 1949, Dr. William Powell passed away at the age of 81. He is buried in the Brooksville Cemetery at Dayton, Ore.