In 1915, Dr. Powell sold Pacific College of Chiropractic to Oscar W. Elliott, DC, PhC, MC, a graduate of the college.

In 1915, the tuition for the two-year, four-term DC program was $300; a high school diploma was required for admission.

Between 1909 and 1915, PCC graduated 91 students. Dr. Nellie Byrd, a close friend of Dr. Anna Powell, was a member of the 1915 graduating class. Her 1955 historical account provides some details of that period.

In 1915, the Oregon state legislature passed the law recognizing chiropractic as a licensed profession and established the Oregon Chiropractic Practice Act. 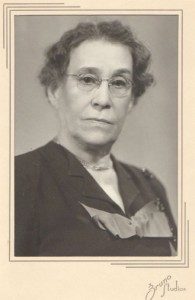 By 1919, Dr. Elliott had moved the campus to SW Park and Yamhill and had expanded the DC curriculum to 3,400 hours; 1,000 hours more than was required by Oregon State law. PCC 1919 Catalog. PCC remained at SW Park and Yamhill until 1925-26 when the college was moved to 125 Grand Avenue North.

On June 20, 1922, Dr. Elliott dissolved PCC only to reincorporate and purchase it under new articles two weeks later on July 3, 1922.

The reason for this odd maneuver most likely had to do with money. The “new” articles of incorporation allowed the college to sell stock in itself, something it did on the very same day the new articles were signed. PCC sells stock in itself.

Oddly, it was not until Aug. 11, 1922, that the State of Oregon issued PCC a “Permit to Transact Business as a Dealer”, allowing the college to sell $20,000 of stock in the corporation.

PCC’s permit to sell stock in itself.

The historical record does not provide an explanation for the peculiar sequence of these events. By the end of 1922, PCC employed 12 full-time instructors and offered three degrees: a DC (doctor of chiropractic), a Ph.C. (philosophy of chiropractic) and a MC (master of chiropractic). The DC degree had expanded to a three-year program (seven months/year) and tuition was $450. Spouses of fully enrolled students could enroll for an additional $275.

The early years of the Dr. Elliott administration were not without challenges. During the 1916-1917 academic year, a group of disgruntled students, led by Dr. Leonard Hasfad, left PCC to start the Oregon College of Chiropractic Physicians and Surgeons. Like many splinter chiropractic programs of that era, it didn’t survive long.

Dr. Elliott was very active in local politics and at the national level as well. Due in large part to the lobbying efforts of Dr. Elliott, the 1925 Oregon legislature changed the Oregon Chiropractic Practice Act to require a minimum of 3,200 hours for chiropractic licensure, including a specific requirement for 400 hours of physiotherapy, electrotherapy and hydrotherapy. It was also through his political involvement that he is credited for aligning PCC with the National Chiropractic Association. Very little else is known about Dr. Elliott. He died suddenly and unexpectedly on December 4, 1926. Board minutes of Dr. Elliott’s passing 1926.

Control of the college fell to Dr. Elliott’s wife, Lenore, who was listed as president in subsequent catalogs. (framed photo of Dr. Lenore Elliott in library with other presidents) Commencement exercise program May 1927. PCC 1926 Catalog. Thirteen months later, Mrs. Elliott filed with the state of Oregon to officially have the corporate value of stock in Pacific Chiropractic College decreased from $100,000 to $30,000. Stock in PCC devalued from $100,000 to $30,000. Dr. Lenore Elliott would remain president of Pacific Chiropractic College for only two years before selling it on January 17, 1929 to William Alfred Budden, DC, for the sum of $20,000.

Sale of PCC by Lenore Elliott.
Budden’s purchase of PCC.
Budden notifies US National Bank of his financial responsibility.
Budden’terms of payout to Mrs. Elliott.